What is tooth resorption? In short, it happens when some of the body's cells start eating away at part of the tooth structure. If your dentist has told you that you have tooth or root resorption you likely have a lot of questions:

Tooth and root resorption is quite uncommon in adults, and many people aren't even aware it exists until their dentist diagnoses the condition.

In this article we will explain exactly what tooth resorption means, how it happens, the different forms it can take, and how it can be treated.

What is tooth resorption?

‘Resorption' normally refers to a process when one part of your body draws in or absorbs another part. Tooth and root resorption involves parts of the tooth being broken down by cells called osteoclasts.

According to the American Association of Endodontists, resorption can occur internally, in the tooth pulp, or externally, affecting the enamel or cementum, the latter being more common. Occasionally, external root resorption may occur alongside internal resorption.

Tooth resorption often begins on the external surface of the tooth and may gradually move inwards. In addition to losing part of a tooth, you may also develop inflammation of the gums and other symptoms characteristic of this condition.

Here are some other quick facts about resorption before we look at it in more detail:

Depending on the exact location of tooth loss, resorption of the tooth is divided into two main classifications.

As indicated by the name, internal resorption affects the insides of the teeth. It is relatively uncommon compared to external resorption and mainly occurs in men. Internal resorption is also more prevalent in people who have recently experienced dental trauma or undergone extensive oral surgery, for example, a tooth transplant.

On an X-ray, an internally resorbing tooth will bear dark spots with a complete lack of internal tissue—this happens when a tooth dies.

This problem is more common than internal resorption and can affect any external part of the tooth. When it begins with the cementum around the root, it may be called external root resorption.

External resorption may appear on the outer surface of the tooth in the form of deep chips or holes. Resorption that extends to the roots of the tooth can be visualized in an X-ray report as a flattening of the root tips as well as a reduction in their length.

External inflammatory resorption is normally caused by a prolonged trauma of the tooth ultimately resulting in pathological resorption. Some of the most common causes of this type of resorption include the drying of the root surface after a trauma, previous surgery, injury to the periodontal ligament (PDL), pressure, or complete exposure of the dentine tubules.

This type of resorption normally is not too severe and is often diagnosed after an incidental finding on an x-ray. Also known as transient inflammatory resorption, it normally heals and only requires proper monitoring.

The common causes of this condition include a limited, localized injury to the root of the tooth or the surrounding area. Following injury, the affected area undergoes osteoclastic activity (the eating away of bone by cells) for two to three weeks before healing begins. If the problem is only limited to the cementum, it is possible to achieve complete healing. However, if the problem involves dentine, re-contouring will be needed.

External cervical resorption refers to a localized lesion in the cervical region of the tooth, just above where the root begins. The problem rarely extends to the pulp and is often caused by prolonged trauma leading to a horizontal and vertical growth of the lesion following periodontal treatment, trauma, or tooth whitening.

This type of root resorption occurs secondary to the stiffening or fusion of the root of the alveolar bone (the bone that keeps the teeth in place). It involves the resorption of the tooth tissue followed by a complete replacement with bone.

The reason why this happens is not well-understood. However, most orthodontic and dental experts believe that the process begins soon after the obliteration of the PDL and the union of the tooth and the bone. The damage to the PDL disrupts the release of the protective regulator that helps prevent root resorption. This encourages the osteoclasts (bone destroying cells) to completely resorb the tooth tissue and replace it with bone.

Learn more about tooth resorption in this video:

There are several factors that may lead to resorption of teeth. The most common cause of external resorption is an injury to the teeth and mouth that leads to swelling and loss of tissue and bone surrounding the affected teeth. Such injuries normally occur due to trauma, tooth grinding, using different orthodontic appliances like braces for a long time, or tooth bleaching.

In the case of internal resorption, the most common cause is trauma to the teeth following an untreated cavity or abscess.

Are there any complications?

Without proper treatment, resorption may lead to a number of complications which include:

When it comes to tooth or root resorption, there is no clear set of symptoms. In some cases, the patient may not notice the problem for years. However, the symptoms soon begin to appear as the resorption worsens.

The most common symptoms include:

The diagnosis of root resorption basically depends on the affected part of a tooth. In the case of internal resorption, the dentist may notice dark spots inside the tooth in an x-ray. This is normally followed by a detailed dental history to confirm any past injuries or dental procedures that might have led to this problem.

A dentist may also perform a physical inspection of the tooth. This normally includes taking x-rays and touching the affected teeth with cold and heat in order to understand the problem, its extent, and any other damage it might have caused.

Treatment for root resorption normally varies according to the particulars of each case. If a dentist is able to spot the initial pink spots on the enamel of the tooth and remove the cells causing damage in time, you may not require any further dental care. However, if the tooth has developed cavities, root canal therapy might be the treatment of choice.

In the case of wide-spread damage, extraction of the affected teeth becomes necessary.

Root resorption in adults is usually indicative of an underlying tooth injury that may cause long-lasting damage and even a complete loss of the teeth. It is possible to miss the symptoms of dental resorption until the disease has progressed to a more serious stage.

Routine dental examinations are recommended for the timely diagnosis and prompt treatment of the problem.

Does tooth resorption cause pain?

Yes, there is a possibility for all patients to develop resorption pain, but every person is different. However, it is relatively uncommon in certain types of root resorption.

How common is root resorption?

Root resorption normally affects 5 to 10% of the general population who have never undergone any type of orthodontic treatment. It is considered among the most common causes of tooth loss.

In the case of internal root resorption, the problem usually begins from the deeper layer of the tooth and works its way outwards. Root resorption can spread to surrounding gums and teeth.

Can tooth resorption be reversed?

In some cases, it may be possible to reverse the effects of resorption of teeth. Often, damage can be repaired but not reversed. Your dentist will advise you based on your condition.

Is tooth resorption an autoimmune disease?

Idiopathic root resorption is a type of root resorption that is autoimmune in nature. It commonly occurs in people suffering from scleroderma and is often diagnosed in dental X-ray reports. However, this condition is quite rare.

What is normal dental resorption?

While resorption in adults may cause long-term damage to a permanent tooth, it is a normal developmental process in baby teeth. The baby teeth of all children continue to resorb as they grow up. This process is important as it makes way for permanent teeth to replace the baby teeth.

However, it is important to differentiate between normal dental resorption and bottle rot, a condition in which the teeth of a child get coated with sugar due to over-consumption of sugary beverages. 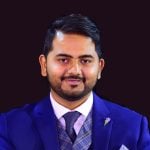 Dr. Junaid Tariq
Dr. Junaid Tariq is a medical doctor and professional content creator and copywriter. In addition to working as a part-time content creator, Dr. Tariq continues to fulfill his duties as a medical doctor at a local hospital and has acquired hands-on experience in both acute and chronic patient care. From white papers to blogs, Dr. Tariq simplifies complex scientific concepts into basic terms to create something easily accessible to the majority. His medical knowledge includes general medicine, dentistry, medical manufacturing, pharmacy, nursing, optometry, chiropractic, plastic surgery, and emergency care, among others.
Sources

How to Fix Receding Gums

Dead Tooth
Scroll back to top