This is neither bad nor good and both can be effective ways to whiten teeth, whether used in at-home teeth whitening kits, or for procedures at the dentist's office. So why do some dentists and some whitening kit brands choose one over the other?

In this article, we'll take a deep dive into the issue and address the following:

We hope this information helps you decide which tooth whitening product is best for you!

Hydrogen peroxide (H2O2) contains hydrogen and oxygen and is highly reactive. When it is in its purest form, it is a pale blue color. But for most purposes, it must be heavily diluted with water.

Hydrogen peroxide is very reactive when exposed to oxygen. The resulting oxidization means it's an effective bacteria killer and stain remover. If hydrogen peroxide isn't diluted, it's a very strong and dangerous chemical.

In its diluted form, we can use hydrogen peroxide for a wide range of applications, such as bleaching hair, disinfecting shallow cuts, and household cleaning.

One of the other popular applications for hydrogen peroxide is in cosmetic dentistry as the active whitening ingredient in tooth whitening procedures, and that's what we're here to talk about today.

What is carbamide peroxide?

Carbamide peroxide is a chemical that is actually made up of hydrogen peroxide and urea, an organic compound found predominantly in animal waste. Urea's other name is carbamide.

Since we now know that carbamide peroxide actually contains hydrogen peroxide, it stands to reason that there are plenty of similarities between the two. But there are still some differences as well, which may or may not be important in your search for information.

Ask a dentist: Why are my teeth turning yellow when I brush all the time, don’t drink coffee and don’t smoke?

Tooth discoloration is unfortunately a natural part of the aging process as the enamel on teeth wears down over time due to chewing. This exposes the yellow-colored dentin layer underneath and is the main cause for teeth appearing yellow. But of course teeth can also become discolored from eating or drinking certain food or beverages and tobacco use.

There are several different options for temporarily restoring the whiteness in your teeth including products that use the ingredients mentioned in this article. As bleaching agents, both hydrogen peroxide and carbamide peroxide are equally effective. Patients treated with carbamide may see quicker results but after a few months go by there is no discernible difference.

There are lots of similarities between hydrogen peroxide and carbamide peroxide, but what about the differences? Let's have a look at some of the main differences between them.

Pros and cons of each

As we've established, both carbamide peroxide and hydrogen peroxide are effective teeth whiteners, but each one has its pros and cons, which we'll take a closer look at now.

Pros and cons of teeth whitening with hydrogen peroxide

Pros and cons of teeth whitening with carbamide peroxide

In the video below, Dr. Jane Gillette from the American Dental Association walks us through the various bleaching ingredients available and talks some more about the similarities and differences between them.

Although both hydrogen peroxide and carbamide peroxide are safe and effective ways to whiten teeth (when used in lower concentrations and following the instructions of your dentist or whitening product), there is a newcomer to the market that is quite promising as well.

PAP is the abbreviation for phthalimidoperoxycaproic acid, a non-peroxide whitening agent. Even though it doesn't contain peroxide, which is the base of most teeth bleaching products, it has been proven to be just as effective as peroxide products.

PAP works to whiten teeth by going through the enamel layer and breaking down color-holding molecules, oxidizing stains, and thus lightening the color of the tooth, just like hydrogen peroxide and carbamide peroxide.

The difference is that peroxides release free radicals during the whitening process, and these can cause sensitivity and in some cases damage your teeth and gum tissue.

PAP, on the other hand, doesn't release free radicals during the stain oxidization process, and thus some dentists consider it to be safer, and the likelihood of experiencing sensitivity is all but eliminated.

We have a complete guide to whitening teeth with PAP if you are interested in learning more.

Snow only takes from 10 to 30 minutes per day of wear, over 21 days to complete treatment. It is able to lighten and eliminate all sorts of stains, including those from tobacco, wine, and coffee. You can read more about Snow in our full Snow review, or check out their wide range of products and famous whitening kits.

Hismile is another at-home whitening kit that uses its own special PAP+ formula to whiten teeth, strengthen enamel, and reduce preexisting sensitivity. PAP+ is a combination of PAP, and nano-hydroxyapatite, known for its enamel-strengthening properties, and potassium for sensitivity reduction.

The Hismile kit consists of gel-filled pods that you apply to the LED mouthpiece. You can find out more about Hismile here, or head directly to their website to get started with PAP+ whitening.

Hydrogen peroxide and carbamide peroxide are the most common active ingredients you can find in teeth whitening products. They are both effective and safe to use, as long as you follow the instructions.

Another ingredient being used more often in whitening products is PAP, which doesn't release any free radicals during the oxidization process, and therefore, causes no sensitivity, which is a problem some people experience with hydrogen peroxide and carbamide peroxide.

What is the difference between carbamide peroxide and hydrogen peroxide?

Where can you buy carbamide peroxide?

Unlike hydrogen peroxide, which you can buy over the counter in low concentrations, carbamide peroxide must be bought as part of a tooth whitening treatment, like Smile Brilliant.

Natalie used to work as a Community Health Worker and Health Insurance Navigator. She continues to follow her passion for connecting people with the healthcare they need by writing informative content about dentistry and medicine.
Medically reviewed by: 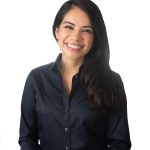 Cosmetic Dentistry
Scroll back to top